In 2003, Cranfield University began a 4 year doctorate research programme to develop a set of guidelines for maintaining synthetic turf. The project, funded by the Institute of Groundsmanship (IOG) (www.iog.org) and the UK Government’s Engineering and Physical Sciences Research Council (www.epsrc.ac.uk), had the task of creating a new set of guidelines to help support the IOG’s membership in their maintenance of synthetic turf – a set of guidelines based on a body of evidence. Following completion of that research, Cranfield University have prepared this document with the Institute of Groundsmanship – aimed at groundstaff and facilities managers alike.

Starting from scratch as far as scientifically researched information was concerned, the study had to focus on one particular system of synthetic turf pitch. This has raised the question ‘Why focus on 2G, when 3G is the new standard for pitches?’ This was answered at the 2008 IOG Conference in Liverpool when delegates were asked ‘Do you maintain synthetic turf?’ 90% of the audience responded yes. Of that 90%, 90% were looking after 2G pitches. The methods here are easily transferred to filled 3G surfaces and when they have been researched in detail we shall publish a second set of recommendations for 3G turf.

The IOG 2012 Fund was established to make grants available for educational, research and benevolent purposes – developing and supporting the grounds management profession, and those involved in it. 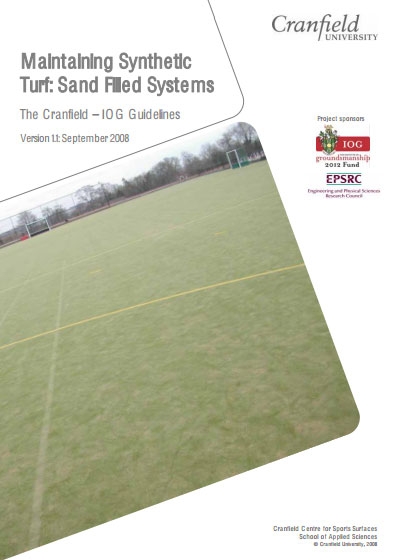