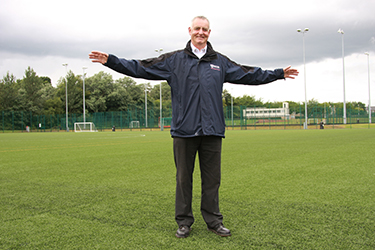 The artificial sports pitches at Longbenton sports ground, the Centre for Physical Recreation & Sport for Newcastle University, have undergone a Replay Revive® Plus+ process and top-up of the pitch’s infill.

The process has not only restored the playing qualities of both the sand-filled and rubber-filled surfaces, but has also safeguarded its projected life expectancy and thus protecting the university’s initial investment.

Works included the Revive Plus+ process of the sand-based pitch used for hockey with 6 tonnes of sand infill top-up. The same process was also carried out on the 3G pitch with 10 tonnes of rubber infill top-up and 800 metres of repair.

The Replay Revive® Plus+ process extends the life of a synthetic sports pitch and minimises the risk of injury to players by improving surface grip and reducing compaction. It uses a specially developed, single operator machine to remove contaminants from the infill of the surface. Rotary brushes penetrate deeper into the infill compared to static brushes, which are commonly used, breaking up the contamination and removing it with a powerful vacuum filter system for disposal off-site. The infill is then filtered before it is distributed back onto the surface. It helps reduce compaction of the surface and lifts the pile of the carpet whilst enhancing its porosity and helps maintain the playing characteristics.

The hockey pitch is used almost exclusively by students for training and matches, whilst the 3G pitch is used by students and a local football league twice a week, so is used by thousands of people every week. “Students pay a lot of money to come here so we need to have the best available facilities for them at all times,” explains Ian Walker, Grounds Manager for Newcastle University.

Ian and Deputy Grounds Manager, Tom Vasey, have their own in-house maintenance machinery, namely a SISIS Oscar, SISIS Litamina and SISIS Flexicomb – all powered by an Iseki compact tractor which are used twice-weekly by their permanent Groundsman, Gary King.

“Replay already carry out maintenance work at our neighbouring University, Northumbria and was recommended to us as a contractor. As soon as they carried out their on-site inspection, I was comfortable that I had brought in the experts as all of their staff have been very knowledgeable throughout the process.”

The sand-based pitch was laid six years ago, whilst the 3G pitch is now five years old. Players mention that the facilities are the best in the area and that is testament to the maintenance Gary carries out in-house, but after six years, both himself and management felt that both pitches were in need of a deep clean.

“Replay cleaned the surfaces to a high standard and when they finished, it was like having a new pitch. The Replay Revive® Plus+ can hopefully extend the life of our pitch by an extra few years and massively reduces repair and replacement costs.”