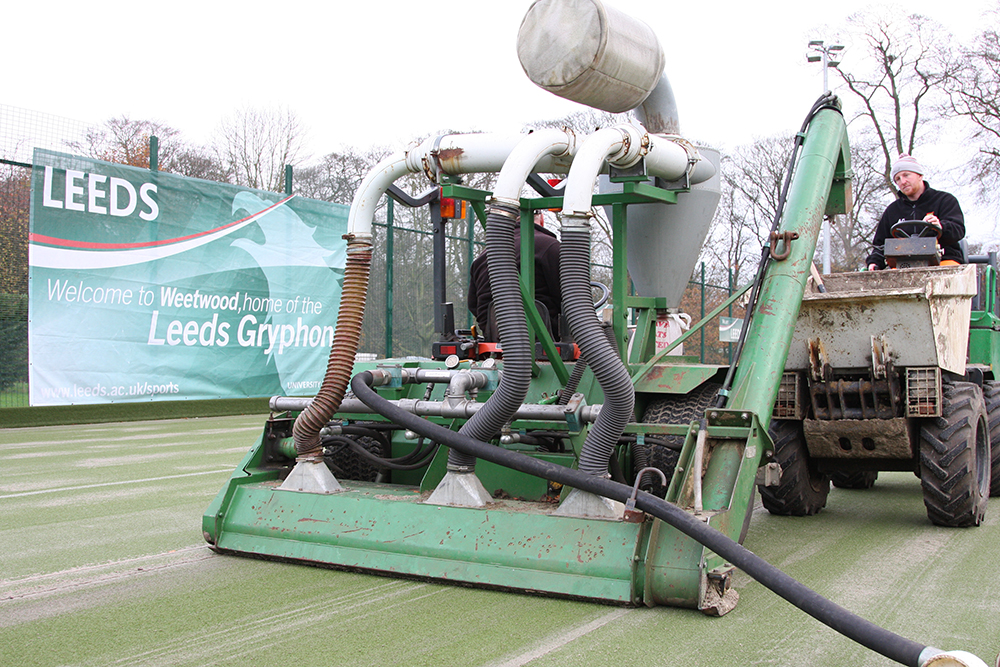 Following complaints of a slippery surface, The University of Leeds sought the help of Replay Maintenance to ensure its sand dressed hockey pitch returned to its usual excellent standards.

Sports Park Weetwood, University of Leeds, is renowned for playing host to some of the finest hockey in the UK. Not only is Weetwood recognised as an England Hockey High Performance Assessment Camp and Junior Regional Performance Centre but the England Hockey North offices are based on site. The facility supports a wide range of hockey activity which includes the Yorkshire Youth Hockey League, Leeds Hockey Club, the University hockey programmes, county and regional school championships as well as hosting England Junior Hockey Teams, Welsh Dragons Hockey team and the Regional Masters Hockey tournament.

It’s no surprise that the pitc h has an incredible amount of usage. With 12 hours use on a Saturday and Sunday, all day on a Wednesday and evening sessions every week from 4pm till 9pm, the pitch sees approximately 60 hours usage a week. It was inevitable that the pitch would start to show the all too familiar signs of wear and tear.

“We were starting to receive complaints of a slippery surface. The players couldn’t stand on their feet with the high level of hockey that’s played on the pitch and the speed of the game. So we really needed to find a solution,” said James Wright, Chargehand at Sports Park Weetwood.

James explored a number of recommended treatments from various maintenance contractors which unfortunately were not “thorough enough” to clear the problem. After a string of unsuccessful results, Labosport, a world leader of independent testing laboratories dedicated to sports surfaces and equipment, advised James on the procedure needed; he then went away to carry out research on the process.

“At the University we have to get appropriate quotes from a wide range of various suppliers. So we had a number of companies competing for the tender but I was really impressed with the way that Replay Maintenance came across,” said James.

Replay Maintenance carried out their popular Rejuvenation process which can restore artificial turf pitches to a “good as new” in terms of performance and appearance. In some instances, the process can also double the playing life of the surface. Therefore, more and more sports facilities are opting for the Replay Rejuvenation process as an alternative to a new pitch because the speedy process saves both time and minimises loss of revenue for the facility.

The work is carried out by Replay Maintenance’s fully qualified and experienced team who operate the company’s class leading Beaver machines. The contaminated infill is extracted utilising compressed air directly delivered into the carpet, decompacting the surface and driving out the contaminated infill. Pile fibres are cleaned, untangled and restored to a vertical position while weak seams are also repaired. A purpose-built sand spreading machine then distributes and brushes in fresh infill to the desired depth. The outcome is a pitch which maximises playing performance, surface life and sees the customer with an excellent return on their investment.

After recommending the procedure to James, Labosport returned to the University to undertake rigorous testing. The results revealed a 30% increase in traction, improved drainage and was deemed to meet all of the International Hockey Federation’s (FIH) pitch requirements.

Following the glowing results, James commented that it certainly won’t be the last time the University turns to Replay Maintenance.

“I’m extremely happy with the work that was undertaken by Replay Maintenance and we have already agreed that they will be returning to carry out more rejuvenation work on another pitch later in the year,” he said.