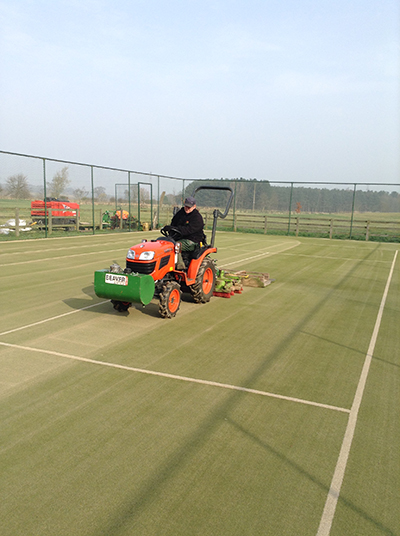 When a private artificial tennis court in Yorkshire began to show signs of deterioration in both its ability to drain and its performance levels, the owners were keen to reverse this process and restore the usable condition of their court.

The court was originally installed in the early 1990’s, and at twenty years old was displaying the recognisable signs of an artificial sports surface whose age and continued usage had started to threaten its usable life. Not wanting to spend unnecessary funds resurfacing a pitch that could potentially be used for at least another five years’, the owners contacted Replay Maintenance for advice.

Far from discussing its replacement, the company recommended a Replay Rejuvenation® process to address issues arising from recent poor drainage and contamination levels that the surface had been experiencing.

“Due to the age of the courts, we noticed rainwater was taking longer to drain away,” said Alan Black, the owner. “We contacted Replay Maintenance to see what our options were to rectify this problem before it really impacted on the use of the court. They identified the problem straight away, and completed a deep-clean on the court.”

Private tennis courts are especially prone to moss and vegetation growth, as they are largely situated in the shade of overhanging trees and adjacent buildings, and often lay unused for all but a few months of the year, which jeopardises both the cosmetic appearance and the health & safety of the courts.

The characteristics associated with tennis – the concentration of play across the surface, the location of the courts and the irregular use of facilities out of season – bring with them inherent problems for the artificial grass on which the sport is played.

Play is often concentrated towards the baselines, and continued usage and high wear in these areas can cause compaction of the sand infill. As well as hardening the feel of the carpet underfoot, compacted sand prohibits adequate drainage through the carpet, resulting in standing water and surface contamination.

Concentrated play can also displace the sand infill away from high-use areas and cause excessive wear to the baselines. Short-pile courts typically measure 12mm high, and the sand infill helps to protect the top of the carpet. As high or concentrated levels of usage cause the carpet pile to become flattened and compacted, topping up the sand levels helps to counteract any resultant movement of the infill, whilst also restoring grip afforded to players.

The Replay Rejuvenation® process restores sand-filled synthetic surfaces to an ‘as new’ performance and appearance, whilst often doubling the playing life of a pitch or tennis court for a fraction of the cost of replacing the carpet. And, unlike replacing the artificial surface, the Replay Rejuvenation® can be completed in days – saving facilities time and minimising loss of revenue.

Replay Rejuvenation® is also just as effective on long-pile surfaces – extracting the infill to any chosen depth.

“Steve & Richard worked very hard to ensure that the best possible result was achieved. They did a first class job and it is hard to believe that the original surface is nearly twenty years old – it now looks like a new court,” said Alan.