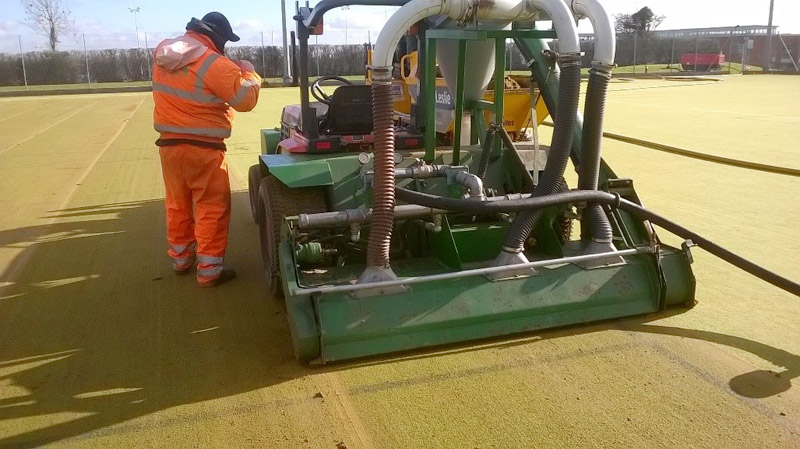 Leicester Grammar School have both a sand based and water based hockey surface which need slightly different maintenance regimes. Alongside general blowing and spraying work they conduct weekly in-house brushing of the sand filled surface, and drag-matting on the water-based pitch.  When it was time to take the maintenance to the next level they turned to Replay Maintenance.

The school has a reputation for excellence in sport and physical education, benefitting from the 75 acres of playing fields and sports facilities that surround the school. The school has close relationships with Leicester Tigers, Leicester Ladies’ Hockey and Leicester Mens’ Hockey teams, with current and past pupils representing these clubs at all levels. The two all-weather hockey surfaces at the school are kept in optimum condition by Head Groundsman Ed Ramsden and his team of 3 groundstaff and Replay Maintenance.

During term time the artificial pitches are used every day for curriculum activities followed by extra-curricular and local clubs after school, often totalling 7 hours of play per day. Understanding that maintaining the artificial pitches was key to protecting the schools investment, Ed attended an IOG Artificial Surfaces event where he met Nick Harris of Replay Maintenance. With the sand-filled pitch starting to show some early signs of its age they asked Replay, along with some of the other companies they met at the IOG day, to come and assess the pitches.  “Nick was very professional and delivered a competitive proposal for a Replay Service Agreement consisting or a quarterly Revive process on both surfaces, along with a one-off Rejuvenation on the sand-based pitch” explained Ed.

Replay Revive uses a specially developed machine to remove contaminants from filled and water-based carpets. It de-compacts and rotates the infill whilst a series of filters and vacuums remove dust, debris and broken down fibres. A deeper clean is performed by Rejuvenation – compressed air is delivered into the carpet, de-compacting the surface and driving out the contaminated infill. The pile fibres are cleaned, untangled and restored to vertical before a brush works the new clean infill returning the surface to an ‘as new’ performance and appearance. It can double the playing life of a pitch for a fraction of the cost of a new carpet.

Final word from Ed, “The surfaces are playing really well since Replay came in to do the work, so we certainly don’t have any complaints. Nick’s my main point of contact and this has always been easy and efficient.”